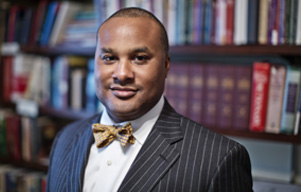 A native of New Jersey, he grew up in an Episcopal family.  His early childhood memories were going to church with his parents and siblings, participating in the life of their home parish.  Rev. Fischer also cherishes the times he would travel to various parishes with his grandfather, the late Rev. Canon Isaiah G. Bell, also an Episcopal priest.

Rev. Fischer received his undergraduate degree in finance from Morehouse College.  After several years of working in New York City, he returned to his beloved alma mater, serving as the Associate Director of Alumni Relations and Annual Giving Programs (2001-2006).  During his time at Morehouse, Rev. Fischer began to discern God’s call on his life under the tutelage of the rector of St. Paul’s Episcopal Church, the Very Rev. Robert C. Wright.

Rev. Fischer answered God’s call in 2006 and continued his studies at the Virginia Theological Seminary (VTS) in Alexandria, VA, where he earned a Master of Divinity degree.  During his course of study he was deeply committed to the life of the community, holding many leadership positions including Student Body President. Also during this time,  he was a Canterbury Scholar at the Canterbury Cathedral in Canterbury, England.

During his early years of ordained ministry, Rev. Fischer followed his grandfather’s footsteps as an administrator at VTS.  As the Director of Alumni, Annual Fund and Church Relations (2009-2011) of the Seminary, Rev. Fischer led two of the highest grossing annual fund campaigns in the institution’s recent history.

In 2011, Rev. Fischer returned to Atlanta to serve the congregation that raised him up for ordained ministry.  He began his ministry as the minister for children and youth before being asked to serve as Priest in Charge following the election of his mentor, the Rt. Rev. Robert C. Wright, as the Xth Bishop of the Diocese of Atlanta.

A recipient of numerous awards and citations, Rev. Fischer was proudly inducted into the Martin Luther King, Jr. International College of Ministers and Laity at Morehouse College in April 2012.

Rev. Fischer is blessed to share his ministry with his lovely wife, Mrs. Rhonda D. Fischer, also a native of New Jersey. She was educated at Emory University Goizueta Business School where she earned a Master in Business Administration, and the University of Virginia, from which she holds her bachelor’s degree in marketing and finance.  They are the proud parents of one son, Charles IV.