Greatest Stories of the Bible on television this month 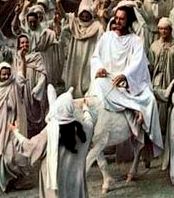 For two weeks in April, television audiences will be treated to an unprecedented collection of inspirational movies and mini-series when UP presents “The Greatest Stories of The Bible” in honor of the Easter season.  Starting on Monday, April 7 and continuing through Easter, Sunday, April 20, UP will air 21 classic stories from the New and Old Testaments plus one all-new UP Original Movie during prime time, totaling more than 123 hours of programming. The list UP’s “The Greatest Stories of The Bible” includes:

*The Story of David – A biography of the second king of Israel follows David from his days as a humble shepherd to his death as king, recounting his accomplishments, his struggles, and his sins. (1976) Stars: Timothy Bottoms, Anthony Quayle, Jane Seymour. Wednesday, April 9, 8 p.m. EDT/5 p.m. PDT.

*Barabbas – Oscar® winner Anthony Quinn plays Barabbas, the criminal set free so that Christ could be crucified, who is haunted by the image of Jesus for the rest of his life. (1961) Also starring Silvana Mangano and Arthur Kennedy.  Thursday, April 10, 8 p.m. EDT/5 p.m. PDT.

Jeremiah – A prophet abandons his loved ones in order to relay God’s message of the destruction of the Holy City by the Babylonians. (1998) Stars Patrick Dempsey, Oliver Reed, Leonor Varela. Thursday, April 10, 11 p.m. EDT/ 8 p.m. PDT.

UP, America’s favorite network for uplifting entertainment, is a 24-hour television network that provides high-quality, diverse, family-friendly programming, including original and premiere movies, theatricals, drama and comedy series, music and holiday specials. UP can be seen in 67 million homes in high definition (HD) and standard definition (SD) on cable systems including Comcast, Time Warner Cable, Bright House Networks, Charter and Cox Communications as well as DIRECTV (Channel 338), DISH Network (Channel 188) and Verizon FIOS (Channel 224). Follow UP on the Web at www.UPtv.com, on Facebook at www.facebook.com/UPtv, Twitter on @UPtv and Instagram at UP_TV.