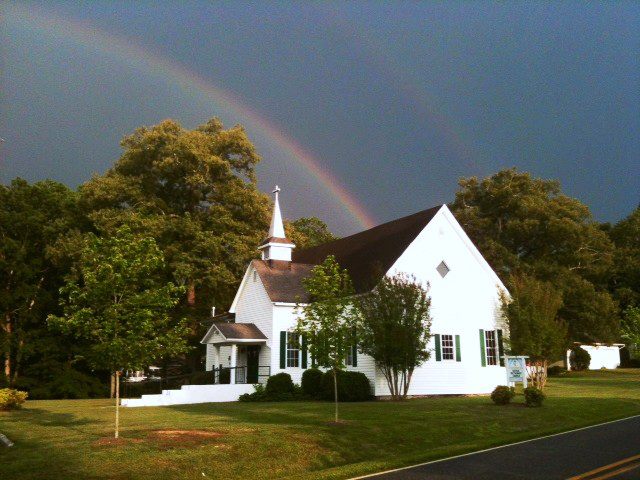 Meridian Herald presents its 16th annual Higher Ground: Camp Meeting Service on Saturday, August 17, 2013 at 5 PM on the grounds of historic Epworth United Methodist Church, 585 Madola Rd, Epworth, GA. Epworth is nine miles northwest of Blue Ridge, GA and 101 miles from Atlanta via I-75 and I-575. Everyone is welcome. The service is free; an offering will be taken. The service will proceed rain or shine.

Featuring old-time preaching, prayer, and singing, this camp meeting service will be held outdoors on Epworth’s historic meeting grounds. The service will open with thirty minutes of camp meeting music, and, after the service, watermelon will be served on the grounds. Fred Craddock will preach and Steven Darsey and the Meridian Chorale will provide music. After the service, tours of the historic Epworth Church and grounds will be available until 7:00 PM.

Among the world’s most renowned preachers, Fred Craddock is Professor of Preaching Emeritus of Emory’s Candler School of Theology. Author of several books, he is founding pastor of Cherry Log Christian Church and Founding Director of The Craddock Center. Dr. Craddock resides with his wife Nettie in Cherry Log, Georgia.

Steven Darsey is founding artistic director of Meridian Herald. A student of and author on vernacular sacred music, he is also active as a conductor and composer. Since 1986, he has served Atlanta’s Glenn Memorial UMC as Director of Music.

The picturesque Epworth valley was the location of an ancient council-lacrosse ground of the Cherokee Indians. During the 19th century, white settlers began outdoor religious “brush arbor” meetings on the meeting grounds. The Fightingtown Camp Meeting drew hundreds each summer to camp and worship. “Fightingtown” is an anglicized, shorthand version of the Cherokee name for the area and nearby creek, which lore says was named for “two frogs fighting each other with stalks of a plant.”

The Epworth Church was founded in 1865 and the Epworth School in 1877, where young people could gain an education. The school now sits on the hill, the church in the valley, with the historic meeting grounds between. On the north side is the “Spring of Faith,” which, according to lore and Epworth family Bibles, was fenced off one summer during a camp meeting, depriving hundreds access to their only source of water. That evening campers held a prayer vigil asking God for water. During the night, amid a howling storm, the spring moved onto church property; so, when the morning came, the campers again had access to its waters. The church yet does their baptisms and holds Easter sunrise services at those holy waters. The first camp meeting of record there was in 1843.  This August will bring the first held there since the annual Fightingtown camp meetings ceased in the 1890s.

Camp meetings began in the 19th century south, when farmers, after the crops were laid by, would go "camping” with their families and friends for a week or more. The days and evenings were filled with fiery preaching and impassioned singing. According to on account of the Fightingtown meeting, “at night the camp ground was very beautiful; wagon loads of rich pine knots were hauled to the grounds.  Log heaps covered with dirt were made and the pine knots placed on these.  When they were lighted it was almost as bright as day.”  Camp meetings spread throughout the south and became an integral part of the region’s cultural and spiritual traditions. Many camp meetings continue today, and the participants look forward with loving devotion to the familial, social and spiritual renewal of their annual camp meetings.

Darsey states: “Some of the songs we will sing have been passed down orally, virtually unchanged from the Great Awakening of the early 19th century.  Thus, they are “doubly sacred” to generations of frontier folk who raised their voices to God.

This service is presented by Meridian Herald and hosted by Epworth UMC, Byron Ahrens, pastor.