Did you read about Atlanta’s Interfaith Chapel in the New York Times? The Chaplaincy program was begun by the Christian Council of Metropolitan Atlanta (former name of the Regional Council of Churches) in 1980.  Here's the chapel website.

ATLANTA — The young man, weighed down by luggage and despair, was a first-time flier on his way to a funeral in Detroit. His father’s. He was unaware that most airlines no longer haul checked bags free, and he was short on money. So workers at Hartsfield-Jackson Atlanta International Airport did what they often do when passengers encounter a problem: They sent him to the chapel.

The Interfaith Airport Chaplaincy, in the atrium next to a steak-and-brew restaurant, offers more than a two-item menu of spiritual guidance and comfort. It is the concierge for the disconnected. Maj. Larry Cowper of the Salvation Army and the Rev. Donna Mote of the Episcopal Church lent the traveler a sympathetic ear. Then Ms. Mote accompanied him back to the check-in, pulled out the chaplaincy credit card and covered the fee. “We are kind of an extreme customer service,” said the Rev. Chester R. Cook, senior chaplain at Hartsfield-Jackson, whose three full-time pastors are augmented by some 50 volunteers representing 10 faiths. The airport, the world’s busiest, serves over 225,000 passengers a day. 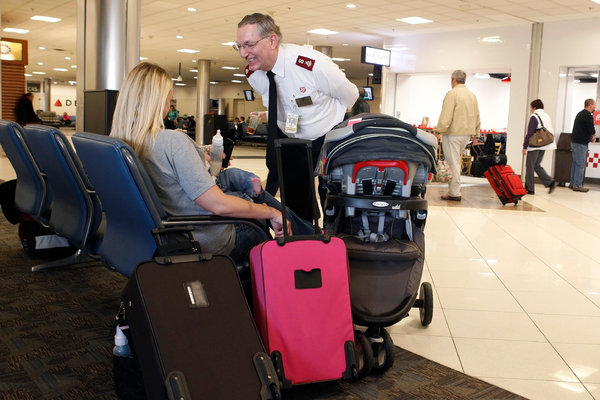 Maj. Larry Cowper of the Salvation Army, a chaplain at the airport in Atlanta, ministers to both fliers and staff members.

As flight delays worsen, security lines bulge and nerves fray, chaplains at airports across the country cruise up and down concourses, casting a trained eye on the swirl of humanity in search of anybody who appears in need.

The range of tasks is becoming as limitless as the blue sky, including playing mediator at a ticket counter, buying a hot meal for the hungry, arranging hotel rooms for the stranded and bus rides for the broke. They still offer religious services, and even conduct the occasional wedding, but God’s work in the airport concourse is increasingly about solving pressing earthly problems.

“The very essence of what we do has shifted,” said the Rev. Chris Piasta, a Catholic priest who oversees Our Lady of the Skies Chapel at Kennedy Airport and spends time at La Guardia Airport, which does not have a chapel. Being an airport chaplain, he said, is no longer about sitting idly in the chapel waiting for the afflicted to arrive.

Many American airports have clerics of some kind, but none more comprehensively than Atlanta’s, where the chaplaincy is under the auspices of a nonprofit sustained by grants and donations. Only Mr. Cook draws a salary from the chaplaincy; the two other regulars are assigned and paid by their denomination.

Ms. Mote, the Episcopal pastor, was newly arrived last November, still in training, when, on a hunch, she checked the departures board for lengthy delays. Noticing one, she proceeded to the gate area and found a traveler agitated by the realization that she would miss her aunt’s funeral. “I’m on the edge of a panic attack,” the woman confided.

A simple request from Ms. Mote — that the woman discuss her aunt — turned into an impromptu memorial service. Then the chaplain elicited a belly laugh and led the woman in prayer.

Chaplains also play the role of peacemaker, as when Ms. Mote defused a confrontation by stepping between an irate traveler and an airline aide. She gently placed her hands on the flier and “talked him down,” she said, noting that airline policies restricting physical contact with fliers do not apply to chaplains.

She was not around to prevent a young man from striking his girlfriend in a boarding line. While he was taken to jail, Ms. Mote negotiated with the airline to place the shaken woman on a later flight at no extra charge.

“We can do things to have an impact,” said Mr. Cowper, whose experiences run from the tragic to the trivial in his nearly six years at the airport: helping workers cope with the suicide of a co-worker, phoning consulate general offices to assist a foreign traveler with an expired passport or fixing issues with improper names on plane tickets.

Recently, Celeste Millen of New Port Richey, Fla., and an adult daughter were burdened by excess luggage when they saw Ms. Mote in cleric’s garb on a train en route to Hartsfield-Jackson. She helped with the bags and guided Ms. Millen to a check-in counter near the train at the airport, then lingered to wish them well on their journey.

“It was like an angel had come to us,” said Ms. Millen, joking that her daughter is an over-packer. “She had a manner that put us at ease.”

“To the traveling public, we are Good Samaritans,” Mr. Cowper said. “To the airport employees, we are pastoral.”

On his daily strolls, Mr. Cowper makes a point to address those whom he labels the “invisible workers,” behind-the-scenes laborers like Bryant Woods, a shoeshine man. Last summer, before Mr. Woods underwent prostate surgery, Mr. Cowper shared a prayer at his station. “He helped me get through the surgery,” Mr. Woods said.

Mr. Cowper has also ministered to a Transportation Security Administration crew that was coping with three employee deaths in a short span.

On the brighter side, besides conducting weddings, he has met a man who introduced himself as Jesus.

After his shift one evening, Mr. Cowper answered his cellphone, and a gate agent put a passenger on the phone who said, “I’m on my way to kill a man.”

Mr. Cowper pried out some details: The passenger believed an investigation into the apparent murder of his daughter was dragging, and he was after a suspect. They chatted, and the caller said before hanging up: “Thanks. You’ve given me something to think about.”

Sifting through the news over the next few weeks did not turn up any account of a revenge killing, to Mr. Cowper’s relief.

At an airport, where fliers and workers are bound to the clock, crises large and small must be addressed quickly.